Edwynn Houk Gallery is pleased to present an exhibition of recent work by Abelardo Morell (American, b. Cuba, 1948), which marks the artist's third one-person show at the gallery. The exhibition consists of 20 large-scale photographs from his series Flowers for Lisa, which is comprised of variations on the theme of floral still lifes. Flowers for Lisa is titled after and dedicated to Morell's wife of over 40 years, Lisa McElaney. The artist will be present at the opening reception on Thursday, 9 March from 6-8pm.

In 2014 Abelardo Morell made a photograph of flowers for his wife's birthday. What started as an ordinary bouquet, set up in a vase in the artist's studio, became the impetus for an investigation into the depiction of floral arrangements throughout the history of art. Morell shot the same bouquet many times, rearranging it over and over in the same vase, and photographing it repeatedly. After making over 20 photographs of the various arrangements, Morell digitally compiled the multiple exposures, letting the computer software try to make sense of the chaos of imagery to form one image. The resulting photograph, Flowers for Lisa (2014), is a demonstration of the passage of time that challenges the very definition of a still life (a picture consisting predominantly of inanimate objects). This single picture captures the transformation of freshly cut flowers into bending, wilting stems. Eventually losing their petals, they form puddles of color that twist into the wood veneer of the artist's work table, dissolving and disappearing before our eyes.

"I had no idea a series would follow. However, something in the making of that first photograph gave me a newly found spark to experiment in ways I had not done before."

Morell continued to photograph flowers, in part because they are both common and familiar, but also because they have been among the most conventional subject matter in the history of art. It became his challenge to represent flowers in unique and inventive ways. Morell utilized all of the "opportunities that are possible in making art" by experimenting with techniques of painters, sculptors, print-makers and photographers to create a new narrative. Inspired by Jan Brueghel, Giorgio Morandi, Édouard Manet, Georgia O'Keefe, Irving Penn and Joan Mitchell, the artist has created an entire series of unexpected still lifes.

Abelardo Morell holds an MFA from Yale University and a BA and honorary doctorate from Bowdoin College. He also received an honorary doctorate from Lesley University in 2014. In 1993, he was awarded a Guggenheim Fellowship. Until 2010, he was a full-time professor of photography at Massachusetts College of Art, where he continues to work with graduate students. Morell was the recipient of the International Center of Photography’s Infinity Award in 2011. In 2013, Morell was the subject of a retrospective entitled, The Universe Next Door, organized by the Art Institute of Chicago, which traveled to the Getty Museum in Los Angeles, and the High Museum in Atlanta. His work is in numerous private and public collections, including the Art Institute of Chicago, the Fondation Cartier, Paris, the Metropolitan Museum of Art, New York, San Francisco Museum of Modern Art, Victoria & Albert Museum, London, and the Museum of Modern Art, New York, amongst others. Abelardo Morell lives and works in Boston, Massachusetts. 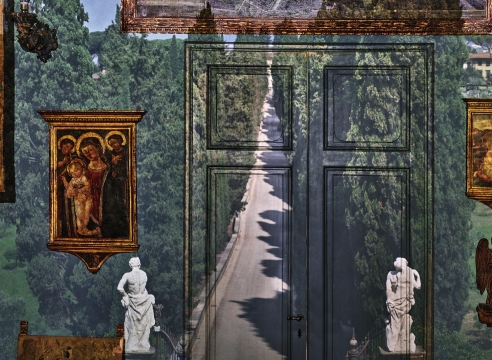 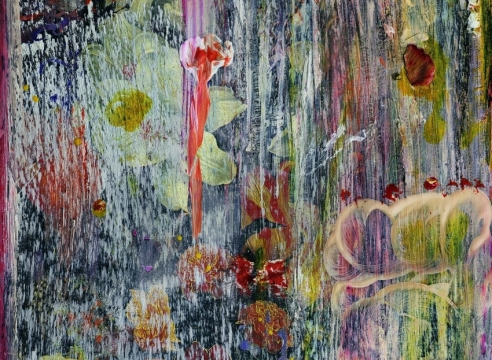 Flowers are very pretty, and that has made them less than compelling as a subject matter for photographers drawn to complexity and contradiction (although a number of modernists, from Karl Blossfeldt to Imogen Cunningham to Robert Mapplethorpe, were interested in them as architectural objects). So it may be hard to believe that the most exhilarating photo book of the year is entirely devoted to flowers — until, that is, you have actually turned the pages of Abelardo Morell’s FLOWERS FOR LISA: A Delirium of Photographic Invention (Abrams, $60). What began as a gift from the photographer to his wife on her birthday — an explosive photo bouquet involving multiple superimposed layers of flowers, rather than a run-of-the-mill three-dimensional one — turned into an expansive project, which tests the outer limits of how a bouquet might be represented photographically. 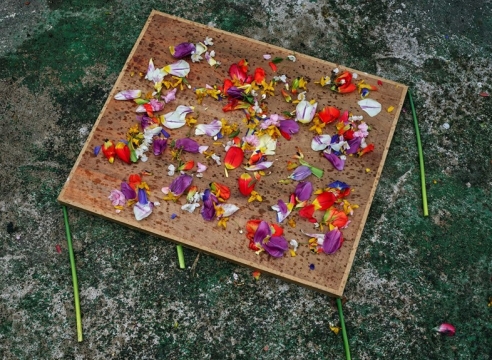 Boston-based photographer Abelardo Morell has a longstanding tradition of giving Lisa, his wife of over 40 years, a bouquet of flowers for her birthday. In February 2014, he decided to give her something more permanent. “I thought to myself, ‘Maybe I can take a picture instead?’ For one thing, it would last longer…” 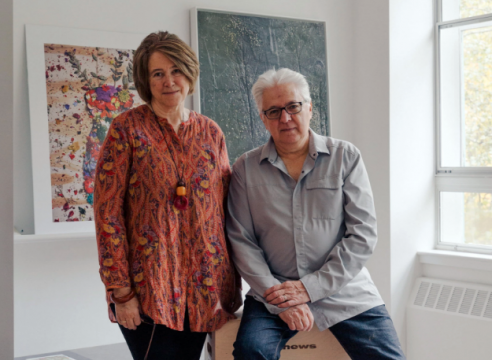 Back in February 2014, the eminent American photographer Abelardo Morell found himself getting tired of the same old thing — that thing being his annual ritual of gifting Lisa A. McElaney, his wife and partner of almost 40 years, with a bouquet of flowers on the occasion of her birthday. (Truth be told, Lisa, herself a distinguished filmmaker and social worker, may not have been all that thrilled at the prospect either.) So instead he hazarded something altogether fresh: a photo of a gift of flowers. 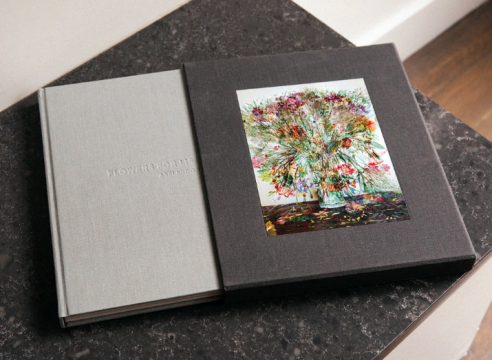 This catalogue was produced to accompany the retrospective exhibition of Mann’s work organized by the National Gallery of Art and the Peabody Essex Museum. Essays by Hilton Als, Malcolm Daniel and Drew Gilpin Faust are illustrated with both Mann’s work and images by Emmet Gowin, Harry Callaghan, Timothy H. O’Sullivan and other photographers who photographed family, landscape and historic sites. The comparisons show how Mann photographed in a way that is uniquely her own.

Morell turns a common, fleeting romantic gesture—giving flowers to a loved
one—into something lasting and permanent: a series of 76 hypnotic photographs, made using a variety of techniques, that commemorate his love for his wife. 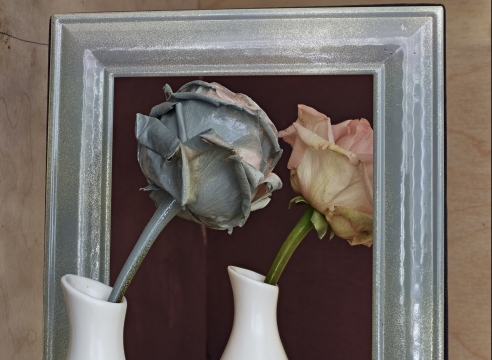 Abelardo Morell, in his latest book, Flowers for Lisa (Abrams), turns a common, fleeting romantic gesture—giving flowers to a loved one—into something lasting and permanent: a series of 76 hypnotic photographs that commemorate his love for his wife. While Morell is best known for elaborately transforming rooms into life-sized camera-obscuras, he’s experimented throughout his career. “The truth is that I have always worked on many things at once,” Morell tells PDN in an email interview. “I have a restless mind that’s interested in many ideas.” These new photographs relate to Morell’s ongoing effort to challenge himself by imagining new ways to approach a commonly photographed subject. 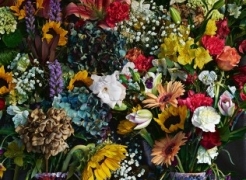 When Abelardo Morell decided to turn a floral bouquet into one of his celebrated photographs as a birthday gift for his wife, little did he know that this touching gesture would evolve into a major series of his work and become the subject of his forthcoming coffee-table book.

While his initial motivation to create a colorful floral still life was because it “felt more enduring than actual flowers, something in the making of that first photograph gave me a newly found spark to experiment in ways I had not done before,” he says. “Precisely because flowers are such a conventional subject, I felt a strong desire to describe them in new, inventive ways.” 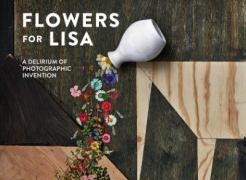 Best known for his surreal camera obscura pictures and luminous black-and-white photographs of books, photographer Abelardo Morell now turns his transformative lens to one of the most common of artistic subjects, the flower. The concept for Flowers for Lisa emerged when Morell gave his wife, Lisa, a photograph of flowers on her birthday. “Flowers are part of a long tradition of still life in art,” writes Morell. “Precisely because flowers are such a conventional subject, I felt a strong desire to describe them in new, inventive ways.” With nods to the work of Jan Brueghel, Édouard Manet, Georgia O’Keeffe, René Magritte, and others, Morell does just that; the images are as innovative as they are arresting. 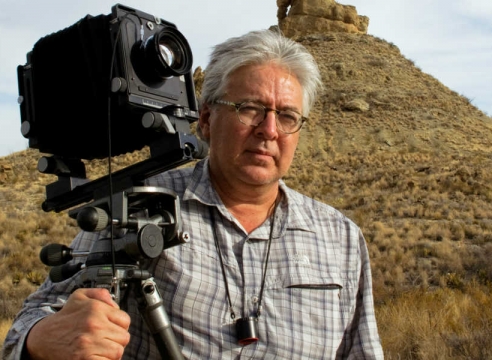 The Lucie Awards is the premiere annual event honoring the greatest achievements in photography. Each year, the Lucie Advisory Board nominates the most outstanding photographers across a variety of categories. Abe Morell is the 2017 Honoree in the Achievement in Fine Art category. He will be honored with the award on October 29, 2017. 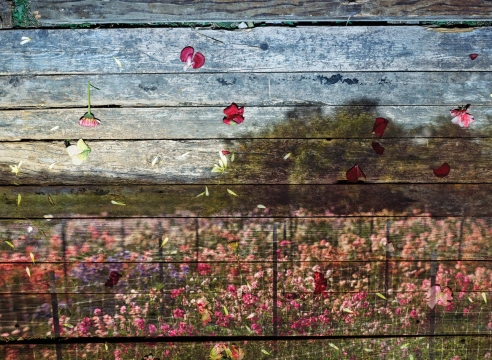 GATHER THE FLOWER GIRLS
On a tiny farm in Washington State, one woman’s floral workshops have become something of a sensation. 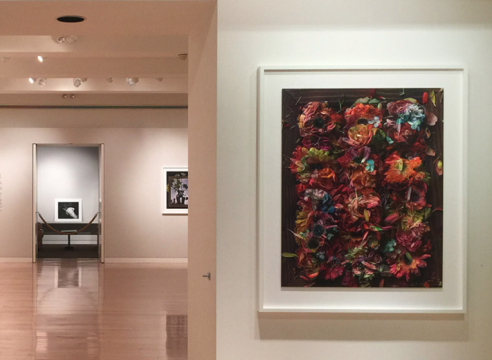 Fifty years ago, the market for fine art photographs barely existed. Major auction houses only began including photographs in their sales in the early 1970s, and American museums were surprisingly late to the party, too. The first to collect was the Boston Museum of Fine Arts, which accepted 27 images from Alfred Stieglitz in 1924 — almost a century after photography was invented.

Today, anyone who argues that photographs can’t be fine art sounds like a crank. Treasures of the medium were displayed in the spring at The Association of International Photography Dealers show at Pier 94 in Manhattan, but New Yorkis a paradise for photography collectors year-round. These six galleries are proof. 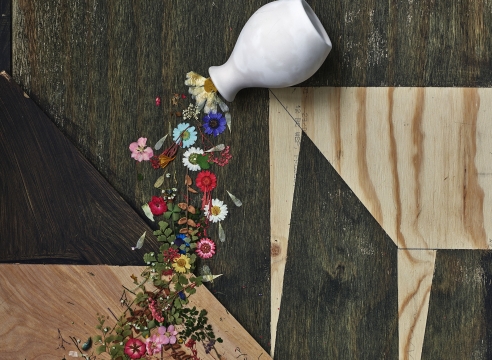 The displays have great contrapuntal rhythms, between past and present, between color and black-and-white, and among sensibilities guided by burning social consciences, the drive to experiment or a joyful embrace of the medium’s idiosyncratic possibilities. Sometimes all of this can be found in one eclectic presentation. At Edwynn Houk, one of Robert Frank’s insightful images of Americans shares walls with Lillian Bassman’s innovative fashion photography and Abelardo Morell’s playful new still lifes, notably a scene of domestic catastrophe created for the camera from plywood, a ceramic pitcher and a plethora of flowers.