Edwynn Houk Gallery is pleased to announce an exhibition of new photographs by Gail Albert-Halaban (American, b. 1970).

Albert-Halaban’s new series, Vis à Vis, is set in Paris, where she peers through and photographs what’s behind the windows in the French city’s apartments and courtyards. Instead of being the voyeur, however, Albert-Halaban is an active participant, stage-managing each scene. The residents are knowingly photographed, as if actors on the film set. They willingly share their intimate, domestic moments: a child’s birthday party, a woman greeting her guests in the foyer, a man reading a book under a dim lamp. The stories and narratives that are told are familiar and open-ended, with Albert-Halaban leaving infinite possibilities as to how the scenes could unfold.

Yet conversely, she is bringing the residents together. By introducing neighbor to neighbor – above, below, next door and across the way – she gains access and permission from both parties to take the photograph from one window while the other is in the photograph. Consequently, a heady dose of optimism can be found in the pictures: her efforts bring disparate souls together, forming a single community.

With Vis à Vis, Albert-Halaban further explores the quintessential paradox of living in a great urban metropolis: the disconnection and estrangement that exists for all its residents despite living and working so physically near to each another. Initially, it seems that Albert-Halaban is illustrating the loneliness of an urban dweller – isolating a tiny top floor window, for example, amongst a sea of windows within numerous buildings across a vast expanse of the surrounding city.

A selection of these Paris photographs first appeared as a specially commissioned portfolio for Le Monde Magazine, Paris, in November 2012. A monograph of the entire series has been recently published in French by Editions La Martinière (Vis à Vis) and in English by Aperture (Paris Views). She has had several group and solo exhibitions both in the US and abroad, including at the Centre Culturel Calouste Gulbenkain, Paris, and the Center of Photography and the Moving Image, New York, and her photographs have been recently acquired by the Fondation Hermès, Paris. Previous series of works include Hopper Redux, the subject of her first exhibition at the gallery, Out My Window, This Stage of Motherhood and About Thirty. Her photographs have been published in numerous publications and online including New York Times Magazine, Huffington Post and Slate. Out My Window was Albert-Halaban’s first major publication, issued by powerHouse Books in 2012. Albert-Halaban holds an MFA from Yale University; she lives and works in New York City. 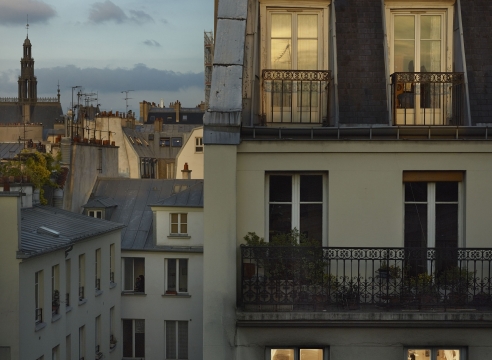 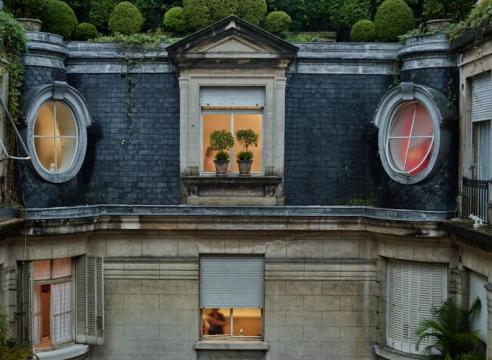 Peering over the edge of an ornate building lining the Avenida de Mayo, Gail Albert Halaban trains her lens on the window of the opposite building. Below her, one of the city’s busiest thoroughfares pulses with commuters in motion, cars honk in the late afternoon swell, yet with the orange haze of dusk setting in behind her, the photographer snaps her subject with silent conviction.