Edwynn Houk Gallery is pleased to announce our representation of the Herb Ritts Foundation with an exhibition of photographs drawn from the estate’s collection. The show will take place from 28 April through 25 June 2011.

Herb Ritts (American, 1952-2002) occupies photography’s Mount Olympus with the most important fashion and glamour photographers of the late 20th Century, including Horst, Richard Avedon, Bruce Weber, and Helmut Newton. His photographs are a standard reference in our collective cultural memory, and the classical poses of celebrities and models with their clean lines and distinct forms are easily recognizable as his style. Although Ritts’ photographs often look highly controlled and stylized, many of them came into being rather intuitively.

Self-taught, Herb Ritts took his cues from the desert landscape surrounding his home and his close proximity to Hollywood culture, which is evident in the graphic quality and visual simplicity of his photographs and the heightened glamour of their subjects. He inserts a sense of Zeitgeist and location to a rigorous formalism that seems to be inspired by modernist photographers like Edward Weston, August Sander or Man Ray.

Edwynn Houk Gallery will present a selection of Herb Ritts’ nude and glamour photographs. These images often play with fantasy, obsession, as well as social history. Often produced within the context of glossy magazines and advertisements, these works have transcended into art while still affording us an opportunity to gaze somewhat uninhibitedly at celebrities, beauty and the body. Herb Ritts was a master in sharing a world with us that was created rather than merely documented.

Herb Ritts (1952-2002) began his photographic career in the late 1970's and quickly gained a reputation for his art and commercial photography. In addition to producing portraits and editorial fashion for Vogue, Vanity Fair, Interview and Rolling Stone, Ritts also created successful advertising campaigns for a number of high-profile brands. Since 1988 he directed numerous influential and award winning music videos and commercials. In 1991 he received the Infinity Award for Applied Photography from the International Center for Photography (ICP) in New York, NY. His fine art photography has been the subject of frequent exhibitions worldwide, with works residing in many significant public and private collections. A major retrospective is planned at the J. Paul Getty Museum and will run from 3 April – 12 August, 2012. 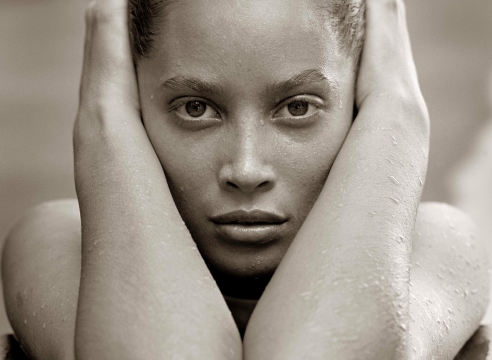