Disfarmer: The Vintage Prints, an exhibition of 100 previously unknown vintage portraits by Mike Disfarmer, will be on view at the Edwynn Houk Gallery from September 8 through October 15, 2005.

Disfarmer: The Vintage Prints is the first exhibition to publicly present the vintage prints of Mike Disfarmer (1884-1959), one of America’s greatest portraitists. Posthumous prints, created from a cache of glass-plate negatives that were salvaged from his studio after his death, have been the subject of several books and numerous museum and gallery exhibitions since 1976, but original prints have been unknown until this time. The debut of Disfarmer’s original vintage photographs is the culmination of an unprecedented two-year historical reclamation project in which a dedicated team of researchers scoured family albums in every home along every road in Cleburne County, Arkansas.

A true American eccentric, Disfarmer was born Mike Meyer in 1884. He legally changed his name to Disfarmer to disassociate himself from the farming community in which he plied his trade and from his own kinfolk -- claiming that a tornado had accidentally blown him onto the Meyer family farm as a baby. Despite his quirks, as the resident studio photographer in tiny Heber Springs, Arkansas, Disfarmer captured the faces of the American heartland at a defining period in history. He documented the families of the farmland as they struggled through the Depression and World War II. He captured the post-war boom and the optimism of the 1950s as well.

Disfarmer is often compared to Walker Evans for his powerfully rendered Depression-era Southern subjects, and to August Sander for his rendering of “people without masks.” In turn, Richard Avedon acknowledged Disfarmer’s influence when he created In the American West.

In his essay on the artist in the forthcoming book Disfarmer: The Vintage Prints, Rick Woodward writes, “Disfarmer is not cruel, patronizing or sentimental about [his subjects’] plight. But neither is he a friend or pastor…he is like a crime scene photographer, determined to record the details because the details are what ultimately will exonerate a person. The reality of their condition—the hats, creases in their jeans and dresses, lines in faces and hands, bad posture, dangling cigarettes and arms, staring eyes—can be preserved in a photograph and serve as existential evidence.”

American Studies scholar and Yale professor Alan Trachtenberg writes of the work, “The Disfarmer images are strong pictures of strong, vivid, magnetically intriguing people. Their lives reside in their faces, their appearances. But even while bespeaking time and place, they do so as distinct individuals, each untranslatable in his or her distinctiveness, each performing the communal ethos in an individual way. Disfarmer so profoundly captures the normalcy of life in his place because he understands from within its deepest psychoses. We are mistaken to think that documentation battles with art in these pictures. A distillation of an acerbic, perhaps tragic view of life with something quirky, homespun, and deeply intuitive, it's the art of Disfarmer which puts him in touch with time and place, which gives his portraits their power as singular documents.”

It is the pleasure of Edwynn Houk Gallery to provide the first public viewing of these magnificent photographs—the original evidence of Mike Disfarmer’s vision and record of the rural American community of Heber Springs in the period between and just after the World Wars.

Disfarmer: The Vintage Prints, (clothbound with dust jacket, 240 pages) will be released by Powerhouse Books/Edwynn Houk Gallery in September 2005. 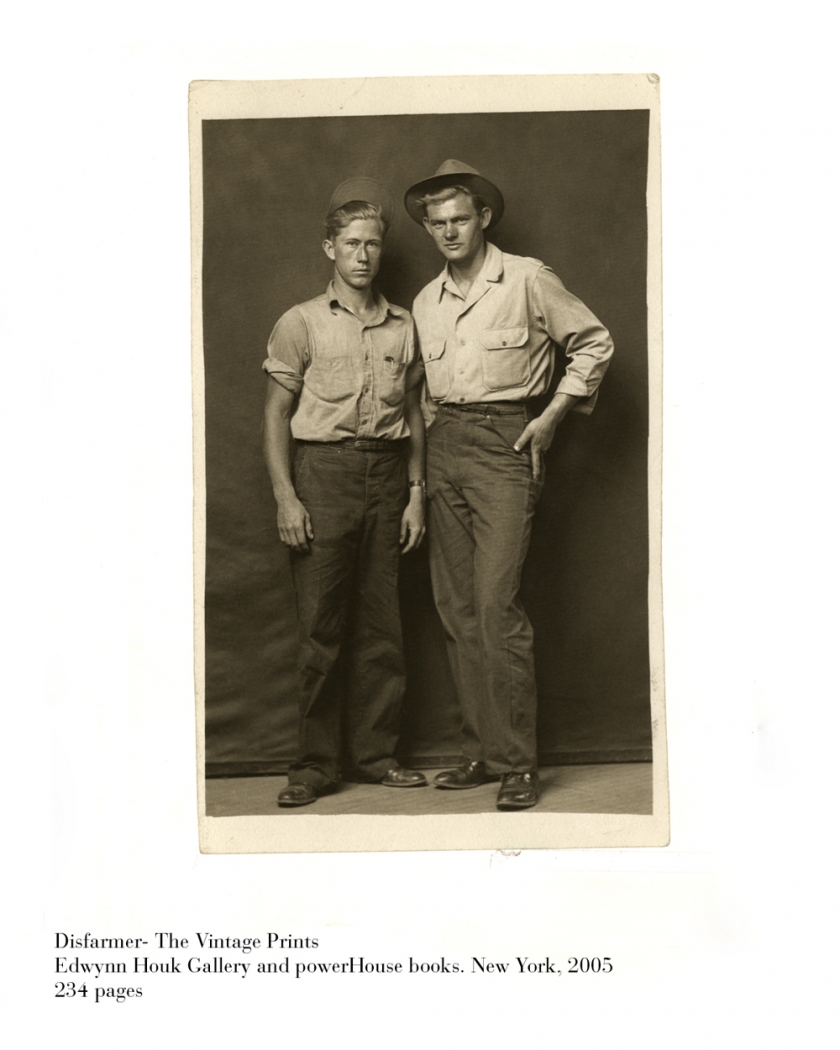