Galerie Edwynn Houk Zurich is pleased to announce an exhibition of photographs by Nick Brandt (b. 1964, London, United Kingdom) opening on Thursday, May 26. The occasion marks the artist’s first presentation at the gallery’s Zurich location and follows the well-received exhibition at Edwynn Houk Gallery New York of Brandt’s most recent series Inherit the Dust. For Brandt’s Zurich presentation, we are pleased to present a special selection of the artist’s earlier photographs from the series Across The Ravaged Land.

With these large-scale sepia toned images Nick Brandt pays homage to the impressive animals native to Kenya’s expansive landscape. Working for weeks on location in the African savanna, Brandt studies his subjects through the lens of a medium format film camera, just as carefully and considered as one would construct a portrait in a studio setting. He spends days with each animal and waits for a moment of connection, the decisive moment, when everything moves into place and the subject’s individual character is captured in a perfectly composed scene. This approach is particularly evident in the large-scale portrait of one of Brant’s favorite subjects, Elephant on Bare Earth, Amboseli, on view in the exhibition.

Likened to the iconic and emotive portraits of Richard Avedon, Brandt achieves a similar intimacy with his own more unpredictable subjects. John Berger’s seminal essay Why Look at Animals examines humanity’s perception of superiority over the animal kingdom as a result of mankind’s observation of animals without the acknowledgment that they may also be observing us. Through his own work, Brandt in turn subverts this idea by presenting the animals of Kenya looking back at the viewers, not as inferiors but as fellow sentient creatures.Nick Brandt was born in London, United Kingdom, in 1964 and studied painting and film at London’s Saint Martin’s School of Art. In 2011, the Fotografiska Museum, Stockholm, hosted the artist’s first major solo museum exhibition and this year the institution will exhibit Brandt’s newest series Inherit the Dust, from May 20 through September 11. Brandt has been the subject of exhibitions worldwide at institutions such as Salo Art Museum, Finland; Preus National Museum of Photography, Oslo; Maier Museum of Art, Lynchburg, Virginia, and Hangaram Art Museum, Seoul. Several monographs of Brandt’s work have been published, including On This Earth (Chronicle Books, 2005), A Shadow Falls (Abrams, 2009), and Across The Ravaged Land (Abrams, 2013). The artist lives and works in the mountains of Southern California. 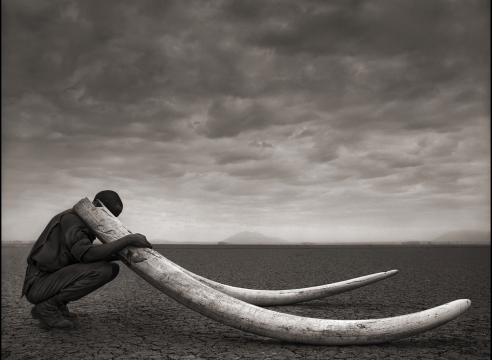 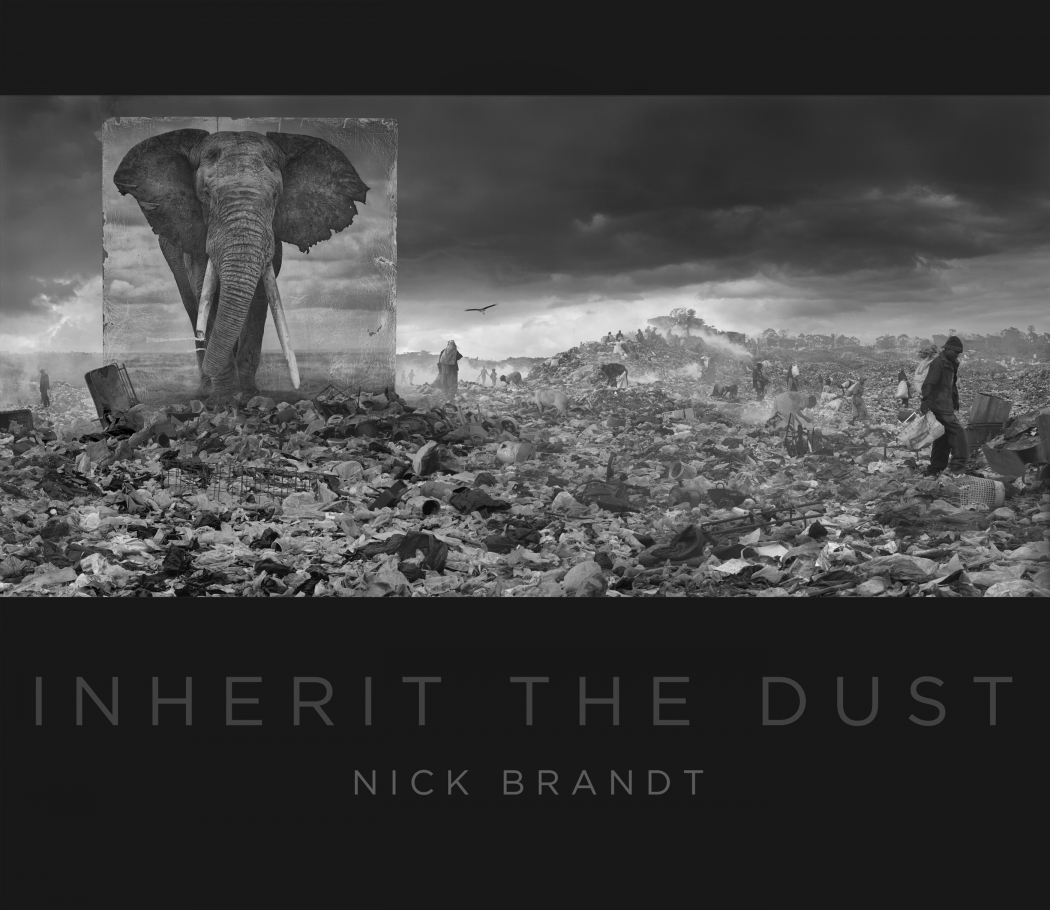 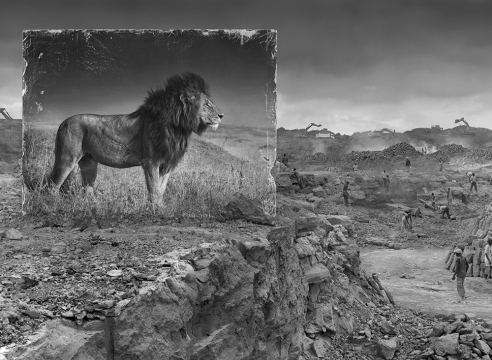 From Dust Till Dawn, a Photographer’s Tragedy Set in Africa
Nick Brandt in Magnifissance 20 March 2018

London-born photographer Nick Brandt, in his recent collection, Inherit the Dust, tackles tragedy with an epicness, intimacy, and integrity that is bringing the world to its knees, in prayer for the preservation of life itself — the natural world. 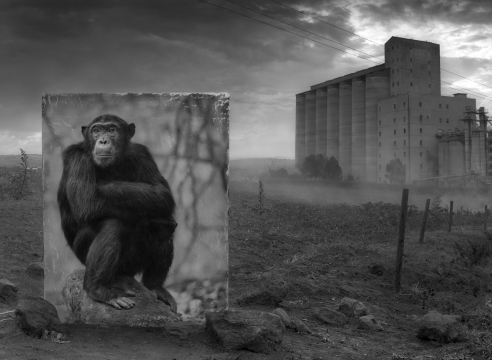 Nick Brandt: Inherit the Dust at Stockholm, Berlin and Paris
Nick Brandt in The Eye of Photography 25 May 2016

Many of Nick Brandt‘s photographs of African wildlife look like studio portraits, a Richard Avedon perhaps.  But they are not, they were taken in situ on African land with a patience born of love, and without a telephoto lens.  He used a Pentax 67 ll to photograph the animals and a Mamiya RZ67 Pro II for the onsite images in this series. There is no doubt that his photographs are, in his words, “achieved by one not so simple thing:  getting very, very close to the animals.”  His photos are exquisite depictions of animals and a way of life we may be on the brink of losing... 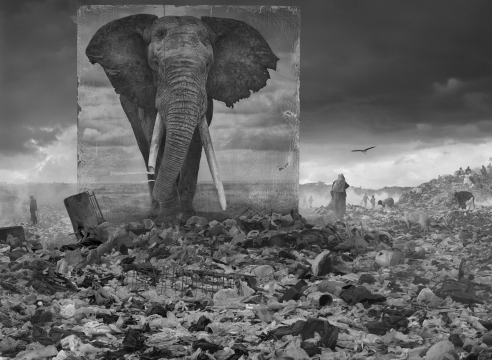 Inherit the Dust: Photographing 'the ghosts' of animals
Nick Brandt on BBC News 10 May 2016

British photographer Nick Brandt has been making intimate portraits of East African animals for close to two decades. In that time, many of the places he works have been transformed by rapid development, and the environmental devastation that often comes with it. Now, in a new book and series of international exhibitions is called Inherit the Dust, Brandt attempts to show what habitat destruction looks like by placing giant portraits of animals in landscapes where they used to roam. 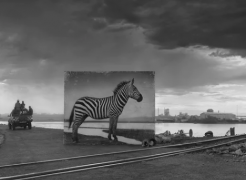 Nick Brandt built lifesized panels depicting Africa’s great creatures and placed them in scenes where they used to roam. The resulting photographs serve as a potent reminder of what poaching, habitat loss and climate change put at stake. 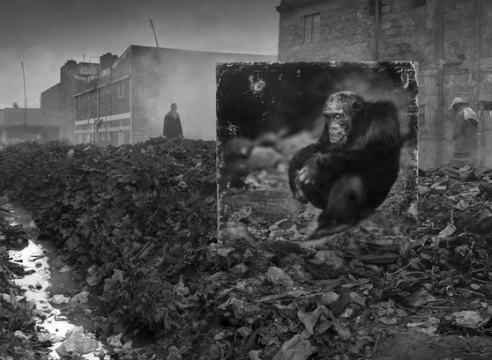 Nick Brandt’s latest work is both gorgeous and disturbing: He applies his stately animal portraiture to a potent caveat about the Earth’s fate. Brandt returns to East Africa, where he’s photographed his trilogy of wildlife-imagery projects in recent years. This time around, he places life-sized panels of great and endangered species—elephants, rhinos, zebras, lions, apes—in locales where the animals once roamed, which are now littered with detritus from factories, dumpsites, quarries, overpasses and other man-made intrusions.