Versailles, Deambulatoire of the Chapelle Royale, 2006

Versailles, Vestibule of the Chapelle Royale, Detail of the Boiseries #1, 2007

Versailles, The Meridienne, Detail of the Boiseries and Rideaux #1, 2007

Edwynn Houk Gallery is pleased to announce an exhibition of fifteen large-scale photographs by Robert Polidori. A fully illustrated catalogue will accompany the exhibition. The show will take place from 17 April through 14 June 2008 with an opening reception for the artist on Thursday, 17 April from 6-8 PM.

A project that has spanned over twenty-five years, Robert Polidori: Versailles documents the decadence, eccentricity, and ultimate transformation of the palace from monarchical symbol and heart of Ancien Régime France to international tourist destination and modern museum. Following a period of unflinching auction sales on the palace grounds during and immediately after the French Revolution, the "Citizen King," Louis-Phillipe, bequeathed Versailles to the cultural patrimony of France in 1830. Conservation on the palace began in the 1880's, but the modern era of restoration did not begin until John D. Rockefeller gifted 60 million francs to the project from 1924 through 1936.

Exploring issues of historical revisionism through restoration, Versailles emphasizes architectural detail and the majesty of 18th Century Rococo/Baroque design. At the same time, Polidori suggests the ambiguity involved in any restoration project: what happens to a room or structure when the old is made new? Robert Polidori: Versailles envisions a temporal paradox; an 18th century palace restored by a modern society attempting to imagine itself as it once was. What remains is a visual citation of both past and present, a powerful invocation of history and modernity within the confines of a single frame. In an extraordinary display of technique, Robert Polidori's use of an 8 x 10 large-format view camera allows for a level of clarity and focus that is unsurpassed in contemporary photography.

Born in 1951 in Montreal, Robert Polidori is considered one of the world's leading architectural photographers. Polidori is the author of eight books including Versailles (Place des Victoires 1999), Havana (Steidl 2001), Metropolis (Metropolis 2004), and After the Flood (Steidl 2006). An exhibition of his work entitled After the Flood featuring photographs taken in the wake of Hurricane Katrina was exhibited at the Metropolitan Museum of Art from September through December 2006. Robert Polidori is featured in the permanent collections of the Museum of Modern Art, New York, the Los Angeles County Museum, the Metropolitan Museum of Art, and the Bibliothèque Nationale, Paris. 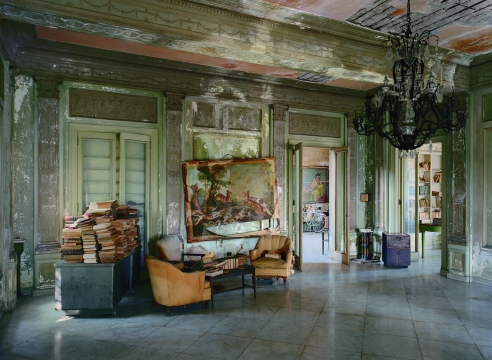