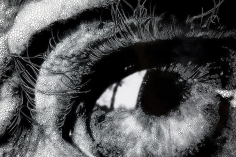 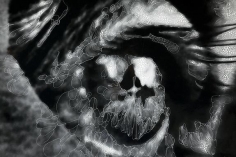 "Bremer’s technique is novel and utterly hybrid. Using various inks, he draws directly on slightly blurry c-print enlargements of photographs, and often adds splotches and streaks of photographic dye. Almost always, the underlying photographic images have much to do with personal and family history; a best friend from Bremer’s teenage years, a shot of himself as a kid, a view of a room taken from under his grandmother’s piano, his family on vacation, a former girlfriend. These are the unpretentious snapshot images, the family album images, the photographic mementoes of a life that Bremer meticulously and obsessively draws on. So meticulously, in fact, and with such fine, tiny lines that you figure he either uses a magnifying glass or is in a trance (neither is the case). In some of Bremer’s works the underlying image is quite clear, while in others it’s almost totally obscured, but in any event one sees it through a scrim or a veil of intense surface activity, which can be at once elaborately ornamental, psychedelic, playful (replete with suggestions of doodling), turbulent, and downright magical. Always, Bremer’s found photographs become dreamlike and fantastical, and two opposite impulses are fused; documentation and hallucination. Moreover, while Bremer admits to a high level of automatism in devising his drawings, you also sense that this automatism involves a great deal of complex human feeling, ranging from harrowing fears and losses to whimsy and blissful response." (Excerpted from “The more you look, the more you see” by Gregory Volk, 2004)

Utilizing the artist’s signature style of obsessively applied dots of paint onto a glossy photographic surface, Bremer renders his subjects in breathtaking detail. Ranging in theme from nudes to landscapes, still life to family, the uniting element here is the artist’s capability to combine imagery from art of the Dutch Golden Age (which surrounded him during his youth in Amsterdam) with the seductive and dream-like abstractions that he lays over his appropriated photographs.

In the work illustrated here, Eye #1, 2012, Bremer began with a black & white photograph by Bill Brandt (British, b. Germany, 1904-1983) titled Max Ernst’sLeft Eye, 1963 from Brandt’s series of artist’s eyes. Separating the eye from the context of the face was a common motif of the Surrealists whose works were often based on experimentation, automatism, and eroticism - lending themselves to chance and resulting in changing the way we define looking at art. Bill Brandt was focusing on the eye of the artist and on the unique manner in which each artist observes the world and, in turn, filters and reinterprets it for their viewers.

Conversely, Bremer creates his unique work by altering and reinterpreting the existing image, a device more commonly used by contemporary artists and one that lends itself to highlighting the artist’s individual technique over its subject matter.

Still, to experience seeing these large staring Eyes, is an invitation to interpret Bremer’s subject matter. We are seduced to look into the very heart of the oculus, the place we are normally forbidden to stare into and to closely examine the geography of the eye. We are presented with the origins of sight, precisely how and what the eye sees and rewarded with images reflected in the pupil here. At the same time, we begin to explore optics, perception, the gaze, and in effect, the vocabulary of this series. Abstract and whimsical, the painted highlights of the lines and hairs around the eyes come together as works that vacillate between landscape and portraiture, psychedelic topography, op-art fantasy, and that inexplicable space between the physical body and the imagination.

Sebastiaan Bremer lives and works in New York. He studied at the Vrije Academie, The Hague, and Skowhegan School of Art and Sculpture, Maine. He has published two major catalogs: Monkey Brain (2003), and Avila (2006). His work is included in the collections of the Museum of Modern Art, New York, the Los Angeles County Museum of Art, and the Victoria and Albert Museum, London, among several others. A major one-person exhibition and publication is planned for 2013 at the Huis Marseille/Museum for Photography in Amsterdam. 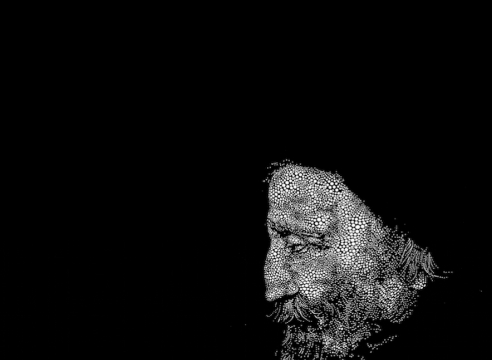